Who You Gonna Call?


Erm...well, not really. Actually, these folks are called Quinte Paranormal Research and they're due to arrive here within the hour.

I've posted before about Matthew's "tingle" and how he seems to know random things he shouldn't. Conversations with whom I presume are imaginary friends, but am not always CERTAIN of that. Odd little "predictions" of the future. You know. The usual.

A few weeks back, while playing trains with me in the upstairs playroom, Matthew suddenly looked up at the empty doorway and asked, "Mummy, who's that man?"

Me: Uh, I don't know, sweetheart.
Matthew: Mummy, where did the man go?
Me: Erm...I didn't see where he went, sweetheart.

The next day, practicing shoelace-tying at the bottom of the stairs, Matthew once again looked up, gazing at the landing in the middle of the staircase: "Mummy, who's that man?"

Me: I don't know, sweetheart. Why don't you ask him?
Matthew: I can't. He's got something covering his head.

Spent a few days mulling these conversations in my mind, trying to determine if Matthew simply has an especially vivid imagination, like his Mama. I am, in case you've not noticed, a bit prone to hyperbole myself. But I digress...

Time passes. The children continue to have restless nights, helped only, eerily, by playing the local Christian music station while they sleep. Or not, as the case may be. I spend several nights tossing about on their floor, having grown quite weary of carting crying redheads back to their beds all night long.

(I remember a weird conversation I had with Mark one night as we lay in our darkened bedroom, willing ourselves to sleep, listening to the boys snore and rustle via the monitor.

"No, they're BOTH sleeping. Listen!"

Sure enough, there is a a defiinite rattle-rattle of the dresser handles, as though someone is moving quietly about the room. Someone heavier than stealthy-footed leprechauns, who have learned to move quietly after dark, lest Mama realizes they're out of bed and makes them stay there.)

A few days pass without "incident" and I mostly forget (ok, block) about things that go bump and men without faces, until an unrelated conversation with my landlady.

We've been having issues with capenter ants and finally, admitting defeat, I called my landlords. They promptly called the exterminators and it was while discussing dates and times and theories as to how the ants were coming into the house, that the hidden staircase came up in conversation.

S. (Landlady. Lovely woman. Sane.): Maybe they're coming in through the back staircase.
Me: What back staircase?
S: The back one. It's boarded up now, but it goes directly into the boys' room.
Me: WHAT???
S: Didn't you notice the stairs above your head when you went into the cellar?
Me: Uh, no. No, I didn't. I probably got distracted by the scary, dark and altogether creepy cellar. (Rush over to doorway and FLING open the door, to reveal, yes, there it is...a staircase. Leading up.)

So, the pest guys come and spray some stuff and all goes back to normal, except that "normal" now includes me obsessing about these stairs. It BUGS me that they're there, hidden. BUGS me that I now wonder if the rattling that sounds in the boys' room late at night is actually some spirit trying to trudge UP those stairs and getting stuck at the top. The dresser now sits where the entrance to the room would have been.

Well, still IS, it's just boarded up and carpeted over. Fan-effing-tastic.

I obsess. I brood. I hover. I spend more sleepless nights on the floor of the boys' room, hyper aware of every creak and moan made in our century old house. Brood some more. 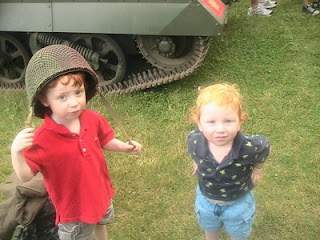 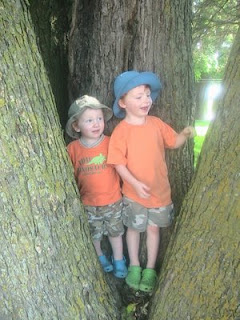 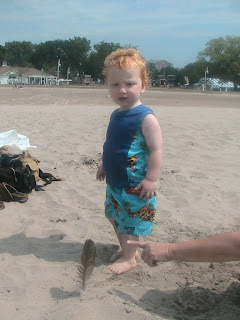 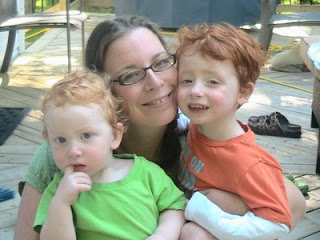 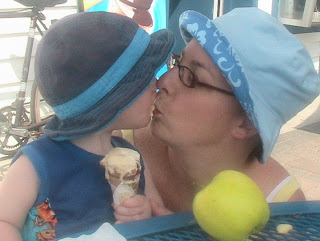 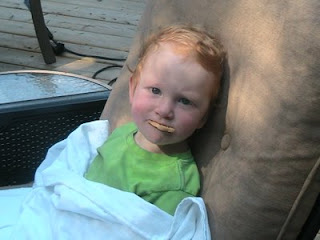 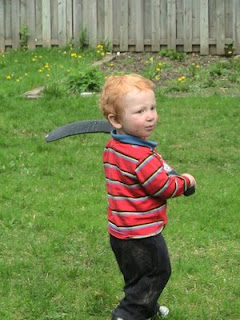 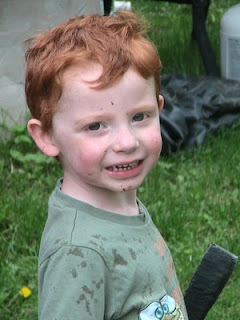 It Takes a (Virtual) Village...

I refer to my son Matthew as a "gift from the universe," which is a cheeky way of saying, "We didn't use a condom and I can't count." According to my swift calculations in that pivotal moment following an "is this a safe time?" query from my husband, there would have needed to be six weeks in the month of January, 2005.

17 days later, having developed a superhuman ability to smell EVERYTHING, I frantically typed "pregnancy symptoms" and "how to conceive" into Google again and again and again - thankful for yet cursing this new and wondrous way to retrieve information. According to the 14,5078 sites I visited I was most likely pregnant and should probably go pee on stick.

I peed on two - not believing the first and dancing giddily when the second one showed that gorgeous, beautiful, terrifying "+" sign. The journey to motherhood had begun.

Along the way, I spent countless hours on the internet, in that obsessive way pregnant women do. One day, I stumbled across a pregnancy message board and was both entranced and mystified by this online community of women embarking on the same journey - some for the first time, others for the third or fourth. Here, I was thrilled to discover a place where any and every question about pregnancy and labour was answered by women who KNEW and could commiserate. Nothing was taboo or off limits. No one tired of yet another soon-to-be Mama's labour jitters even as the bottle versus breast debate raged on for pages. I found a page dedicated to October 2005 Mums and was delighted to have women I had never met join me in complaining ("I can no longer see my feet!" or "Sex is awkward and I'm afraid I'll squish him!") and rejoicing ("I heard my baby's heartbeat!" and "My boobs are fantastically huge!") about our changing bodies, changing lives. Slowly but steadily, as my belly blossomed with life, so too did my online friendships.

The saying, "it takes a village to raise a child," became a reality for me in September of that year, when fire-haired Matthew was born. My parents, in-laws, friends were collectively smitten and joyful - devoted to raising Matthew in true "village" style. Only my village included my now-indispensable internet friends. As the October babies were born and we were tossed headlong into love and motherhood, these women became my supporters, my allies, my guiding lights and in many ways, my second home. A group of us formed our own private message board, where we were free to share all of who we were becoming - not just as mothers, but as wives and daughters, too.

Today, we call our little corner of the internet "Camp!" and it remains my solace, my harbour, my sounding board. Part confessional, part journal and always a place of comfort, Camp is now woven into the very fabric of my being - these days, I am as much Belly as I am Mummy, or Liz. Perhaps even more so.

We are a strange collection of people from all walks of life and even different countries, bonded and bound by the magic of motherhood. Camp Mamas (and one incredible Dad!) have borne witness to my own remarkable journey from "all about me" Liz to proud Mama of Reds. Camp knew I was pregnant with my second son, Luke, before anyone else, including my husband. They are almost as in love with my red-headed leprechauns as I am and never fail to make me laugh, think, share. We cheer and cry with every positive pregnancy test, birth and potty training victory. We bicker and argue and yes, we've lost a few campers here and there, but we are, like the children that brought us together, always evolving and growing and basking in constant love.

During our years together, campers have virtually held and hugged each other through the agony of trying to conceive, miscarriages and the staggering loss of Grace, felled by SIDS in 2006. Marriages have faltered, cracked, ended. Some of us lost parents and siblings. Jobs. Friends in "real life." As parents, most of us have lost our minds.

Campers prayed for my family when my beloved Mum fell ill, when my husband lost his job and my own marriage came perilously close to falling apart. They cried and raged with me when my only brother died this year, bolstered me, their Belly, with compassion and love - all via the internet.

The lines between real and virtual life have blurred significantly in the years since my initial foray into message boards and the wonder of the internet. Later this summer, I will journey to Iowa to spend five days with a beloved camper who has become like a sister to me, and whose sons I've come to love and watch grow entirely through my computer. Campers from all over the States are travelling to meet - my very own virtual village, come to vivid life.
5 comments: