Earlier this week, while I was collecting photos for today, my son Matthew spied a photo of himself and Andrew. He wanted to know why Uncle Andrew has to live with God now.

I managed to stutter out that God needed a really strong angel to help move the heavy stuff. That seemed to satisfy Matthew and off he went, leaving me to ponder my answer.

In life, Andrew could always be counted on to help with the heavy stuff. Physically, he was the strongest person I know – he made his living with his hands and took pride in the things he built. He was good at what he did and I’m glad that he was able to channel his natural talents into a livelihood.

Andrew could also be counted on to help others wade through the heavy stuff in their own lives. The tribute page on Facebook and dozens of emails have been an enormous comfort to me this week, as I’ve discovered that a common thread of appreciation exists, for his gentle, quiet nature coupled with a willingness to listen without judgement. He was friendly to all and genuinely cared about people. Those who were lucky enough to know his love never doubted his fierce loyalty, counted on his sense of humour to keep things fun and light and sought support in his arms, as he also gave the best hugs of anyone I’ve ever known.

When my parents adopted Andrew, 30 years ago, I believed that they got him for me. He was a little tank even then – a blond-haired, blue-eyed cherub, strong and stubborn, determined to do things his way, in his own time. Andrew once tried to dismantle the engine in my dad’s car, just to see if he could put it back together again. Model cars and dinky cars litter my memories of our childhood – he was always tinkering, improving, breaking stuff apart, leaving a glorious mess in his wake.

His love for cars and making messes followed Andrew into adulthood. He lived with Mark and I in Newcastle for a few years, and his room there still housed model cars and bits and pieces of remote control car and Lord only knows what else. He commandeered the shed in our yard, rigging up heat and light by running an extension cord under the grass, into the house. He spent many hours out there, tinkering, smoking and building random things: jersey boxes, speakers, oddly-shaped tables.

I miss the simplicity of those days that seem so long ago, now. For long after the tumultuous teen years that had found my brother and I at odds and fallen from each other’s favour, we had finally found our way back to one another. Both, in our way, had once again, found home.

At day’s end, Andrew would trudge through the door and scoop up my son, effortlessly and grin. It’s said that children and animals recognize goodness and are drawn to those who possess it. Even as a baby, Matthew adored Andrew and I cherish the memory of their easy, loving bond. Andrew took almost as much delight in Matthew’s antics as I did and laughed merrily along with us the night Matthew took his first wobbly steps. I have it on video, and all you can hear in the background is us, laughing.

Despite his troubles and a few miserable funks over the years, there was much to laugh about when Andrew was around. While not a boisterous, life-of-the-party sort of guy, Andrew was still the person I wanted to sit next to at family get-togethers. He possessed a dry, quick wit and many nights found us all in hysterics of laughter over something he’d muttered, some pithy, random observation he’d made.

In our whole lives, the best Christmas Andrew and I ever spent was the first one in Lakefield. My parents and the two of us, special, chosen Schillings’ siblings, stayed up until dawn, drinking too much and laughing like fools at everything and nothing. It was our last Christmas as a foursome, before boyfriends and girlfriends became a permanent part of our family celebrations and I will hear the sound of our happy laughter, forever.

Andrew had the ability to laugh at himself, which is another reason people loved him so much. It’s one of the things I will miss most about him – his “this-is-who-I-am-now-let’s-have-a-drink” approach to life. He rarely passed up an opportunity for fun and if there was a bonfire to muck about with, well, all the better. Andrew shared that with my dad and long after the rest of us had called it a night, the two of them would sit, watching the embers glow, quietly drinking beer. It comforts me now, to remember them together, relaxed and content.

It touches me today, to see so many people who shared his journey and helped shape the man he was becoming, here to bid him farewell. I am pleased with the thought of his friends gathering somewhere, after today, and raising their smokes and their glasses high in the air, so that he might see and offer that shy, sort of goofy grin and raise his own toast back.

Perhaps I was not entirely wrong, all those years ago, believing that my baby brother was born just for me. My mum assured me some months ago that they had intended for me to think that, so that his arrival would be a true celebration. I like to think that he became ours so that I would have the honour of being his sister and for that, I will always, always be grateful.

Mostly, I seek solace in the mental image of Andrew, my gentle warrior brother, in the cool, winter sunshine on his last day. In the end, always, a little boy, playing with cars.

Sweet dreams, Andrew Bamboo. I have loved you since before I ever knew you and I will miss you for all rest of my days.
2 comments:

It is with great sadness... 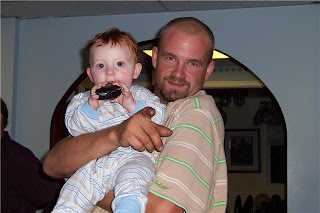 
It is with great sadness that the family announces the sudden passing of Andrew Michael John Schillings on Tuesday, February 10th, 2009 at Lakeridge Health Oshawa. He was 30 years old.
Andrew, affectionately known as “Andy” to most, is survived and loved always by his parents, Patricia and Joseph Schillings of Lakefield. Beloved brother of Elizabeth McLennan, dear brother-in-law of Mark McLennan and cherished uncle of Matthew and Luke McLennan, all of Belleville.
He will be remembered with great love by his girlfriend, Lindsay Collins and many friends in the Durham area. He will also be lovingly remembered by aunts, uncles and cousins in British Columbia, England and Holland.
Relatives and friends may call at McINTOSH-ANDERSON FUNERAL HOME LTD., 152 King Street East, Oshawa (905-433-5558) on Monday from 7-9 p.m. A celebration of Andrew’s life will be held in the chapel on Tuesday February 17, 2009 at 11:00 a.m. Cremation. Donations made in Andrew’s name to the Heart and Stroke Foundation or a local food bank would be appreciated by his family. On-line condolences may be made at www.mcintosh-anderson.com.

It has been a long, terrible day. My parents and I chose Andrew's casket and urns, as he will be cremated following the funeral on Tuesday. Lindsay, Andrew's girlfriend will keep one, as will I and of course, my parents. They plan to create a special spot in their garden, overlooking the waterfall.

That done, we tiptoed in to "visit" Andrew, still on the gurney from the hospital, but lovingly covered by a quilt, courtesy of the funeral staff. He hadn't been embalmed, but I think they did some touching up before we ventured in.

I can't explain the flood of emotions at seeing his sweet, sleeping face. All I could see, superimposed over his beard and 30-year old laugh lines, were images, memories of the little boy he was, the baby brought home from the Children's Aid, the devil-may-care teenager. It was surreal and I think, for a moment, I stopped breathing.

And then my mum came in and uttered not a word. Just gave a keening, absolutely shattering cry and I swear to God, I will hear it all the days of my life. It was the sound of her own heart, breaking and it was awful.

She stood there, my tiny, fierce Mama, over the body of her only son and wept and wept and wept - surely the angels wept with her. For her. Even though I'm pretty sure that some of them are smoking a huge joint with Andrew even as I type, surely Heaven wept for her.

Am home now and exhausted. Keep thinking I'll wake up and this will all be gone, and then I realize that THIS is, and he is gone. My brother is dead.

And life will never, ever be the same.

Please pray for my Mum. Please pray for strength and peace for her weary heart. I am scared for her - that this will be her final undoing and that this loss will be too much for her to bear. And my dad, oh, my beloved Dad. All he wants are Andrew's remote control cars - the ones he was driving in the sunshine, when he collapsed and died.

At the end, still a little boy, playing with cars.