It has been a long, hot summer here.

A long season of waiting: to hear about my husband's new job, to hear from my dad about my mum's condition after an awful car accident, for the weather to break, for rain to fall, for our camping trip - our first as a family - for school to start...

We are jostling about, as a family, trying to figure out who we are, as individuals, as a unit and growing pains - for all of us - are indeed a reality. Together - and apart - we are navigating new waters.

Because of that, I feel especially blessed to have had this entire summer with my sons - watching them grow beyond me and into the men they will all too soon become. I am grateful for each cool morning at the skatepark, just me and them. Ice cream treats. Cuddles and books under the shade of a tree. Afternoons at the beach, watching Matthew learn to swim and Luke make friends all on his own, out of his brother's shadow. 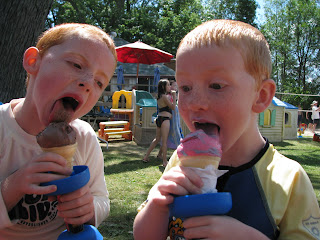 I feel so lucky that we've had my mum for one more summer - witnessed a living miracle as she emerged from the wreckage of her car with a broken leg but an unbreakable spirit.

She is home now, cheerfully getting on with things, embracing the little moments: 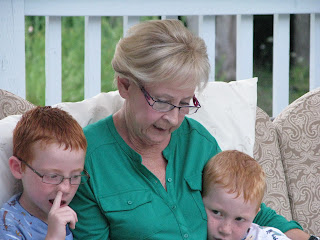 The summer offered up some big moments, too...
Celebrated with my awesome Across-the-Road-Neighbours as  they pledged their love one sunny day in August. As their Mistress of Ceremonies, I am thrilled to honestly say that it was one of the best weddings I've ever been to:
Watched the Reds' jaws drop just last weekend, as the watched their beloved Kindergarten teacher make her way down the aisle to her future-husband. She was a vision in white and rendered the boys silent with awe. Her happy tears at seeing them there, sharing her special day, made all of us fall in love with her a little more: 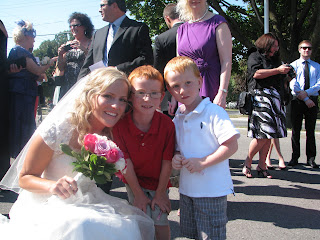 Mostly, as summer draws to a close and the bittersweet ache of that throbs in my throat, I am thankful to my boys, who brought bring laughter and light to each and every day. 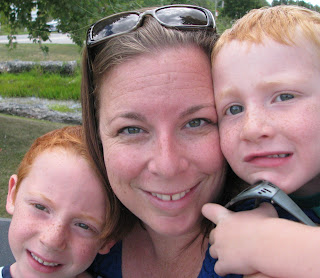 Without them, I would be lost. With them, I am profoundly blessed and acutely aware that these perfect, magical moments are precious and fleeting.
These are the days... 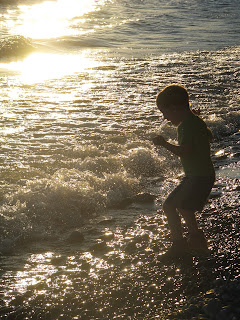 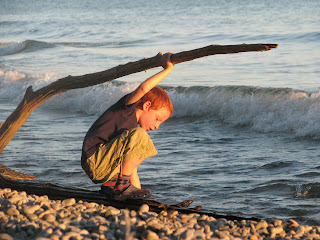 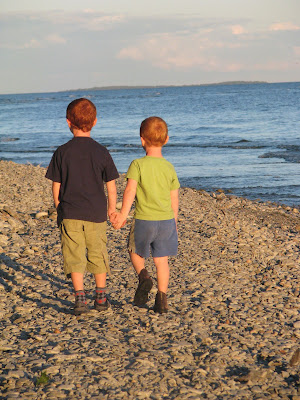 As July gave way to August, with two glorious days stretching long before us, we gathered - Dolphin and Wenchy and I - to celebrate Monica Bata Memorial Weekend.

By the numbers, the weekend that honours the power and scope of female friendship, looked like this:

8. Bags of chips with dip, trays of veggies and fruit and packages of yummy, sinful cakes and tarts that Dolphin and I tossed into our grocery cart last Friday morning. Giddy, we were. Giddy at the prospect of a weekend away, eating, drinking, talking. Giddy I was, at being in a grocery store without the children, who beg for such treats and to whom I usually say, "Absolutely not!"

To Dolphin I said, "I don't think we have enough dip. Here are two more flavours."

2. Coolers we jammed full with trays and booze and ice. Bags we packed with only the basics: bathing suits, shorts, pj's, our newly-printed Monica Bata Memorial Weekend t-shirts: 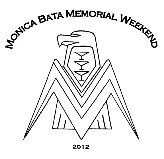 * Designed by Dolphin's husband, the logo on the T-shirts is a clever nod to the film "Thelma and Louise" and is a slightly-modified version of the hood ornament which adorned the 1966 Thunderbird the women drove off a cliff. Our nicknames emblazon the bottom of each shirt and we wore them proudly all weekend long. *﻿﻿﻿﻿﻿﻿﻿﻿﻿﻿

2.5 : Hours. That's how long it took for Mark to realize that we'd left our 8 bags of chips, yummy cakes and dips behind, call Dolphin's husband and for him to then text her with the news: 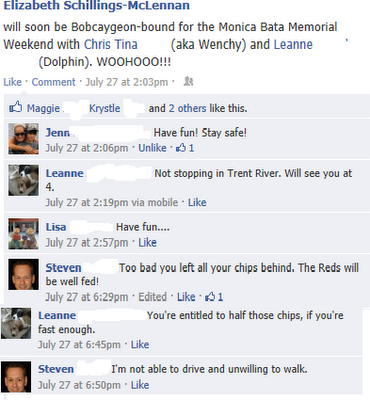 Naturally, we stopped in Bobcaygeon and bought more. Monica Bata Weekend cannot happen unless there are tons and tons of "bad-for-us" bits to munch through, in between the drinking and the laughter.

5:  Upon arrival, the number of minutes it took us to unpack and unfurl our awesome custom-made t-shirts:

300: The number of days we crammed into the first four hours together, conversations spilling into the next as we brought each other up-to-date and settled into comfy clothes and Muskoka chairs on the dock.

2: The number of turtles living underneath the dock.

0: Times I swam in the lake, due to the aforementioned turtles living underneath the dock. Yes, I am a wuss. Please see last month's post about lakes and things that live in 'em, to better understand my paranoia.

To compensate, I drank two extra Palm Bay spritzers and counted the number of times I thought I saw a shadow of something sinister lurking under the dock where I lay, lazily lapping the water with my free hand. (17)

4: Cups of Baileys with coffee I consumed on Saturday morning, watching the day dawn from the dock. In Ontario, during summer, there is nothing prettier than this: 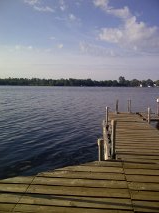 1: Effing hornet that DIVE-BOMBED my forehead just before lunch, rendering me practically speechless with pain and feeling miserable for several hours thereafter. Stupid nature. If it ain't leeches, it's hornets.

45: Minute nap I took in a hammock, in the middle of the day. After a morning on the dock drinking Baileys, the SECOND best thing about cottaging in Ontario is the napping:


26: Times Dolphin nudged me with her foot so that I'd stop snoring, snuggled next to her each night.

1: Phone call I have in to my doctor's office, to request a sleep apnea test.

77: The number of times I thought about not putting that in this piece before deciding that I don't care. If getting this snoring thing looked at means I get more summer weekends snuggling with my Dolphin and sitting by my friends on a dock, then I'll do it, CPAP machine and all.

362: Days until NEXT summer, when we get to do this all again.

1: Wish I have for you, dear reader: May the women who embody the spirit of Monica Bata in your life be as wise and good and beloved as the ones in mine. And may you celebrate those friendships often and well.