On Being Raised by The Reds....

There are days when parenting is easy-peasy, lemon-squeezy.

There are days when parenting honks.

Some days, I am a good mother.

Some days, I honk.

Today, I honked as a mother...until I didn't.

Allow me to confess brag explain:

Matthew and I began our day hollering. Rather, I hollered, he attempted to and then gave up to  burst into tears. I stormed upstairs in anger and to give myself a chance to calm down. Once I had, I was overcome with shame and remorse: he'd been right, I so very, very wrong.

I apologized profusely and then saw him off at the school gate, guilt clawing at my heart, eyes welling.

All the way home, I berated myself. Counted the hours until I could cover his face in kisses and be thankful for another chance to be the mother he deserves.

On the way home, I whispered, "I've been thinking about you all day. Will you forgive me for being so mean this morning?" 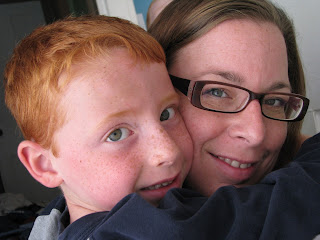 The Reds are tired. And when they're tired, they fight. After supper they argued with the boy next door, the girls down the street and finally, each other. And it was ugly. Ugly and nasty and it took all my waning patience NOT to knock their heads together.

Instead, I sent the other kids home, ushered the Reds inside and  quietly, but firmly ordered them upstairs: pyjamas on, teeth brushed, in bed. NOW.

I raised an eyebrow and pointed a finger for good measure.

Up they went, but not before some shoves on the stairs and punch in the hallway. In the end, I told them they'd have their say once they were in bed. If they spoke ONE WORD before that happened they'd have to go to bed at 6 tomorrow night, too.

Silently, they obeyed, so I sat back and gestured for Matthew to speak first.

"I don't want Luke to sleep in my bed until May 2nd." He crossed angry arms and glared at no one in particular.

Luke wailed and carried on, beating his blankets even as he pulled them up as he climbed into his own bed for the first time in a month. Finally, he too crossed his arms and arranged his face into "mad":

"Matthew can't touch ANY of my stuff ever. Never ever, ever."

I kissed them, told them I love them and closed the door, only to stand outside of it, holding my breath.

"Wanna come sleep up here?"
"OK."
"Can I touch your stuff sometimes?"
"Yeah. I was only gonna make that rule until you're 10, anyways."


I guess this parenting thing doesn't honk after all. 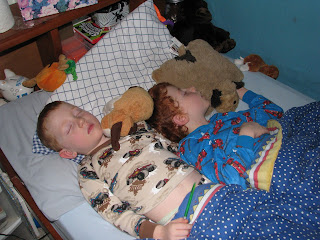 Email ThisBlogThis!Share to TwitterShare to FacebookShare to Pinterest
Labels: Counting Blessings, I am a yeller, Luke, Matthew, Mummy Moments, parenting challenges, The Reds