When Mark and I moved our family to Belleville on a bitterly cold January day in 2009, we had no clue what was coming. We'd sold our house in Newcastle on the heels of a vicious recession and were just trying to keep ourselves - and our family - together in the aftermath of job loss and a frustrating, province-wide search for employment.


There were days, moored here in a strange city in the middle of winter with two boys - one just 3, the other a busy 16 months -when I questioned my own sanity at making such a move. Almost exactly a month later, my brother passed away and in the days between his death and his funeral, I wandered the unfamiliar rooms of our rented house in a fog. Cast adrift. Lost.

By Spring, I'd moved from now-familiar rooms to unfamiliar streets, just beginning to blossom with the promise of new beginnings. I made some incredible friends, fell in love with this city's parks, its people, my neighbourhood and the fresh breath of hope that blew into our faltering marriage.

In 2010, exactly one year after our move to the Friendly City, we spent another frigid January day hauling our possessions and hopes into another house on the same street. Only this one was ours and we were staying for keeps. 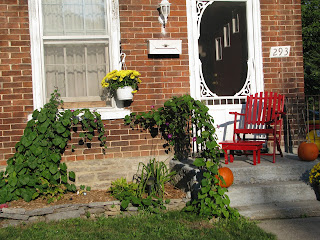 Or so we thought.

In July of this year, Mark received a job offer from a company based in our hometown. With equal amounts trepidation and delight, he accepted the job and began in September, a day after the Reds and I entered SK, Grade 2 and Final Year, respectively.

As of this writing, he has almost passed his probationary period and has given me permission to "officially" announce that - at some point, possibly this summer - we will be moving home.

It feels odd to write that, now. Bowmanville is our shared hometown and many of our memories of childhood are also shared as Mark and I grew up mere blocks from each other.

But as adults, our best memories - for me at least - have been made here, in Belleville. This is where our family has truly grown, even though the Reds were born elsewhere. THIS is the place whose streets I know well - at least, the ones in my end of the city - whose parks have beckoned and shaded and pleased me and my sons for almost five years. It's where many of my dearest friends live, my sons began school and I began to dream of something bigger for myself.

Bowmanville is filled with old, true friends and amazing opportunities for all of us. Its streets are unfamiliar to me now, as they've multiplied a thousand-fold it seems, in the years since we've been gone. But I've been visiting. Since early summer, I've been quietly researching schools, house prices and the professional possibilities for me, once I've graduated in the Spring. I've looked into sports teams and Scout troops, pored over home builders' plans, old photographs and sweet memories.

I've narrowed down the school search to two which are well-run and have great reputations. We know people whose children attend one or the other and are thriving and happy. Our "wish list" for a new house in our old stomping grounds includes being able to walk the kids to school and easy access to parks and other  green space.

Alas. The public school, which is presently being built to accommodate the population of an old one, won't have a playground. Budget cuts have made one impossible and so my hometown friends have rallied to "win" one.

The Aviva Community Fund is a relatively unique concept: communities submit their ideas and plans to competition. The concept/idea/plan/dream that garners the most votes - from anywhere in the world - can receive up to $100,000 towards its goal. In this instance, voting for the playground builds a place to be a kid for deserving students, but it also helps to build a brand-new community at the same time.

I mention it here, dear readers, because an old, dear hometown friend asked me to. I ask you  to vote please, dear reader, so that the children of my childhood friends will have a place to begin building lifelong friendships like the ones their parents enjoy.

So that my sons might begin building them, too.

With tears in my eyes for all that we will be leaving behind and with enormous hope for what we might find, I'm ignoring my own "never plug stuff" rule to ask for your vote.

I will accept your vote with gratitude and love and consider it a farewell gift....or one that says, "Welcome home!"

If you vote, would you let me know in the comments? Thank you. For all of it.