A Visit From Murphy...and Santa Claus

Murphy's Law
Loosely translated and borrowing heavily from Finagle's Law
means:
"Anything that can go wrong, will."

It's been a wild ride at ye old Bellymonster homestead. To long-story-short things, that dang Murphy  popped by for a visit, leaving an expensive mess in his wake.
It started with the furnace: 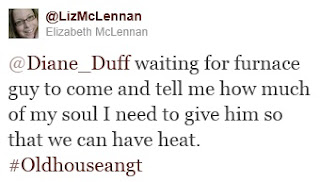 Furnace guy came. Shook head, sadly, eyeing our 42-year-old furnace. Whistled - in bad way - when he saw our chimney. Turned his palm up in an apologetic way and said he reckoned it'd be cheaper to simply start anew.

I cringed, waiting for  the estimate to replace the furnace. Winced when it came. Mark did more than wince. In fact, I'm fairly certain I saw him wipe a tear from his suddenly alarmingly pale face:

We discussed things all weekend long, trying to figure out where we can cut back to see our way around financing a new furnace. On Monday, Mark called from work: 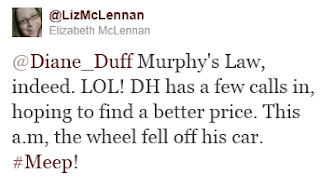 Yep. The WHEEL FELL OFF THE CAR! Thankfully, it happened as Mark turned into the driveway at work and not whilst he was sailing up the 401, but still. We were hoping to get one more winter out of the ol' girl. Alas...

Later that week, I received a second furnace quote - from a man who looked like Santa Claus (without the beard) and who immediately offered to bring some electric heaters by while we made up our minds.

That pretty much made up our minds, so I arranged to have an environmental audit done so that we could take advantage of government rebates, set to end in early 2012.

Spent the rest of the week bemoaning our crummy luck and waiting for the sky to fall. 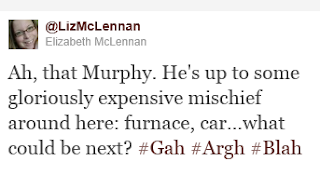 Murphy, in case you didn't know, also likes to sprinkle mischief in threes:

I waited. I fretted. I tweeted:

That Friday, the computer gave one last pitiful chug, a few coughs, a wheeze..

When Mark came home from work, looking exhausted and stressed out, I greeted him with a smile. But it was enough. He knew. Oh, he knew:

Thankfully, we have an awesome friend who provided us with a new-to-us computer and amazingly  generous family, who've  loaned us a car, indefinitely.

On Tuesday, I called Santa Claus (aka. Brian from Rosebush Heating and Cooling) and gave the go-ahead for a new furnace. He cautioned that it might be a few days, as it's a busy time.

20 minutes later, he rang back:

"My guys'll  be over in about 20 minutes."
Me: Uh, OK. I thought you said it might be a few days?
Santa: I did. I pulled them off another job. I hate the idea of your little boys having to face even one more day of cold.
Me: Wow. Thank you!
Santa: You take care of those boys, Mrs. They're precious.
Me: They are. I will. Thank you.

I called Mark at work:

"The furnace people just showed up!"
"Seriously? I thought he said..."
"He did! But he hated the thought of the Reds being cold and sent his crew here straight away."
"Wow."
"That's what I said!"
"I guess Santa Claus came to town early, eh?"

*And you? Got any Murphy's Law fiascos to share? Who's YOUR Santa Claus?*
9 comments:

On Jelly Beans and Other Things...

Monday, after school, having a grape-eating contest - who can make the loudest crunch:

I tossed out a casual, "So Matthew, how was your day?"

Mid-crunch, my boy stopped and then looked away.

"I was the only one who used my accent," he offered, a little flush of pride lighting his face before his gaze dropped back down.

"Awesome! Do you mean your accent when you're speaking French?"

"Well, yeah. I was the only one who was listening but Madame M. didn't give me a jelly bean."

"Do you get a jelly bean for using your accent, then?" I watched as his expression soured further, all thought of grape-crunching forgotten. In a low voice, he answered:

"No, we get jelly beans for listening, but Madame M. didn't give me one."

"Ah. I see. Do you think maybe she just forgot?"

A vehement head shake, tears glistening. "No. She never forgets. She just didn't want to give me one."

Mama Bear rose up inside me, roaring even as I struggled to tamp her down. Calm down, Mama.

I took a deep breath, reached out to take his hand. "That must have hurt your feelings, eh?"

"Maybe she doesn't like me." Though he offered it as an observation, I could hear the question in his voice, wrapped as it was in resignation and defeat. 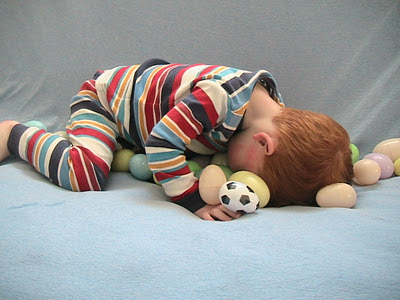 It broke my heart.

"I'm sure you're wrong, sweetheart. I can't imagine that she doesn't like you. I'm sure she just forgot."

Shrugs from Matthew. Helpless gazing from me.

"Let me tell you a story, Matthew. When I was in Kindergarten, I had a teacher called Mrs. Major. Every morning, she filled a plastic egg with jelly bean treats and hid it somewhere in the classroom. Each student was given a chance to search for the egg and eat those jelly bean treats throughout the day."

"It was. But I never got chosen. One day, I asked Mrs. Major when it would be my turn. But she thought I'd had a turn and put me in time-out for telling a fib."

"Really?!?" Matthew's eyes were wide with surprise and indignation. This sort of thing sets his Libra heart aflame. Thirty-five years later, seeing indignation flare in my son's eyes soothed the ache of that memory, long-buried but clearly, not forgotten.

"Really. I was very sad. I wasn't fibbing, she'd just forgotten. But it hurt my feelings."

We sat quietly, letting those hurt feelings - his and mine - settle around us. And then Matthew brightened.

"Mummy! I have an idea! We can get a plastic egg and fill it with jelly beans. Luke and I can take turns hiding it and then you can have your turn finding it! Would that be OK?"

Oh, my son. My sensitive, tender-hearted son. What did I ever do to deserve you?

Out loud I said, " What a wonderful idea, Matthew!  Thank you. We'll get some jelly beans at the weekend and whenever you use your accent with me, you'll get a jelly bean, too, OK?"

"Sounds like a plan, Mummy." His own hurt feelings forgotten, Matthew leaped from the couch and began scouting for good hiding spots. I stayed seated a minute longer, trying to compose myself.

For want of a jelly bean, grace was found.

Tonight's post is brought to you courtesy of the baby monitor. (Yes, I still use one. Don't judge me.)

Matthew: There are TWELVETY-TWO stars and constellations. That's a LOT of stars. The reason you've never heard of that number is because it's so BIIIIIIGGG!


Downstairs, Mark and I sat rapt and  grinning as our firstborn counted himself sleepy. So cute, we said, puffing up with parental pride. But when he began winding himself into a number-counting frenzy, I urged Mark to go on up and settle him down - we have a big travelling day tomorrow and as entertaining as the show was, the boy needed to sleep.

Up Mark went, ushering both boys back into their respective beds, tucking them in. Matthew asked for "the Counting Game, explaining to Luke that "me and Daddy played this game when I was four, like you!"

And so it went until Mark got somewhere near 4000 at which point Matthew yelled, "Pi!!! That's my favourite part!"

Downstairs, I giggled helplessly, enchanted by the sheer pleasure in his voice and the fact that he and Daddy have a special Counting Game that I knew nothing about.

As soon as Mark left the room Matthew began the Counting Game on his own, getting stuck at 16 plus 16.

For almost 8 minutes (yes, I timed it) he counted from one - over and over and over again - struggling to get past 16, but never quite managing it. He ended up at 26, instead of 32, as he was - I imagine - counting on his fingers.

Finally, on the heels of one giant yawn, he proclaimed that 26 was indeed the right number.


Downstairs, grinning through my proud tears, I thought, "For these moments, I am so thankful."


And then sleepily, from the monitor: "I am so proud of you, Matthew." (Matthew, deepening his voice to mimic Mark's)

And you? Have you counted your blessings today?
Happy Thanksgiving, All!
18 comments: