When my parents adopted Andrew, I thought that they got him for me. Indeed, when telling my own adoption story throughout my life, I've often describe Andrew's arrival as "when WE got Andrew."

From the very beginning, I believed that he was mine. He was my dolly, my cohort, my blond-haired, blue-eyed toy and I lugged him all over, straining to hoist his roly-poly body into my arms and totter out of the room so that the adults could talk.

But because I was only his sister and a child myself, I I didn't worry and stress that he cried almost nightly for the first few years or that he hated to be held, spat out his medicine and generally tested the patience of his bewildered parents.

I do remember that Andrew was often sick, with ear infections, throat infections and pneumonia, sometimes all at the same time. Many nights, my parents would bundle me into a blanket and hand me into the pyjama-ed arms of our neighbour before racing off to Sick Kids Hospital with their sickly son. 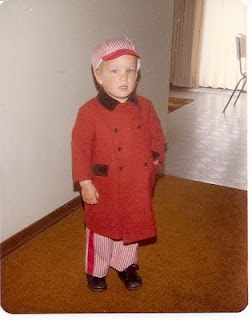 It was always something, with Andrew.

If not his ears, then his nose. If not his nose, then his lungs. His birth mother's pregnancy with him was full-term and uneventful except for two things: the umbilical cord was wrapped twice around Andrew's neck at birth and his birth mother drank throughout her pregnancy.

When asked if they were concerned about drugs and alcohol in Andrew's background, my parents shook their heads, not understanding. In 1978, there wasn't much literature about the effects of alcohol on unborn babies. If the professionals knew anything, it wasn't a lot and my parents knew even less. All they wanted was a son.

And so, two days after Andrew was born, they toted their second, long-awaited child home. The non-identifying information provided by the Children's Aid suggested that he'd be small and stout and dark-haired. Instead, he grew tall and strong and blond and wild.

He was hit by a car while still in diapers, saved only by my Dad laying his hand on the horn of the car they'd been washing together before Andrew, distracted, darted into the street. Andrew never heard us screaming for him to stop, nor did he hear the horn. But the driver of the car did and she managed to bring her car to a screeching halt just as the bumper kissed Andrew's head.

That was the first - but not the last, never the last - time I watched my brother dive headlong into danger and I remember holding my breath, waiting for him to STOP, knowing that he wouldn't.

Shortly after that, doctors discovered that Andrew was deaf, had likely been so from birth. It explained so much - his refusal to listen, to heed. His defiance, his rage, his inability to grasp the concept of "No! Danger!'

Several surgeries and some tubes later, life should have been easier for Andrew. For all of us.

Alas, my cherub-faced baby brother turned his considerable strength and considerable rage into wreaking havoc. Come bedtime, he would scream and scream for hours until exhausted, he'd collapse into a heap in his crib, asleep at last.

Until he learned to climb out of it.

The belt to a discarded housecoat kept him in his room for awhile, after the he snapped the hook-and-eye lock right off the door, from pulling so hard to get out. Toys and books were hastily removed after he spent a quiet afternoon's nap ripping out all the pages and yanking the wheels off of every car he owned. Soon, everything except his bed was taken away, after he took off his diaper and smeared his poop all over the carpeted floors and papered walls in a fit of rage.

He unscrewed the light bulb from his bedside lamp and stuck his finger into the empty socket, shocking his hair into spikes and blackening the wall behind him. I can only imagine how that particular trip to the ER was, for my exhausted parents.

(Actually, now that I'm a parent myself, I shudder to think about it must have been for them, constantly hauling their obstinate, raging son into doctor's offices and ER rooms all over, having to explain that he simply wouldn't listen and seemed hell-bent on self-destruction.) 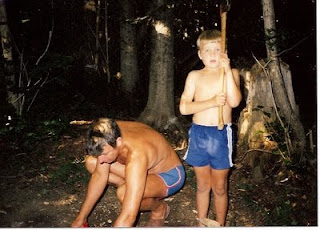 Our neighbours, God bless them, did their best to help. They'd take me at a moment's notice, feeding me, bathing me, making up an extra bed when my parents called to say they'd be overnight at the hospital. Again.

A foster family two houses over probably rejoiced, once Andrew came along. Up until then, their kids were the naughty ones who got blamed for damage and mischief in the area. Ditto the two boys living next door, whose father would often chase them down the street, hollering that they'd better run faster if they wanted to avoid the belting they were gonna get if he caught them. (He never did.)

Soon, foster child Bobby and Andrew were inseparable, prowling about, looking for mischief. They peed on people's walls, peed into basement window wells and thought nothing of flinging dog poop at one another, or passersby. They broke toys, made noise, broke windows, threw dirt. Alone, both boys were menaces but together?

Together, they were a walking ad for reform school:

One summer's day, a few weeks after Andrew accidentally killed the cat (True story. It was an accident. Yes, the cat was mine.) our neighbour George was tarring his driveway. Warmed by the July sun, the sickly-sweet smell of tar was everywhere. Naturally, Andrew and Bobby parked themselves on the very edge of our lawn, all the better to see the messy action. George warned them gently to stay away, foolishly believing that they would, if he went inside for a cold drink and a break from the heat.

Within 20 minutes, Bobby's foster mother appeared at the front door, presenting a completely tarred Andrew to my mystified mother. "I've got one just like this at home," she said dryly, and released the hair on Andrew's head - the only spot on his entire body not painted black.

After a series of panicked phone calls to incredulous health care professionals, my Mum finally got permission from the Poison Control Centre to bath her wayward son in diluted turpentine. Which she did. Four times.

It took WEEKS for the tar to completely disappear from Andrew's skin and even longer for the smell to leave his room. All his linens got replaced, including the bedspread to which he'd taken pinking shears, just for fun.

I don't think George ever really got over it, though. For months afterward, whenever he saw the Dynamic Duo together, he'd purse his lips and march into the house, affronted.

Years after we'd moved away and unleashed Andrew on another quiet and unsuspecting village, the neighbours STILL talk about him. It wasn't funny then, actually. But it's one of our best and favourite family stories now. Remember when Andrew painted himself with tar?

From the very beginning, my Gentle Warrior was his very own kind of legend.