Reaping What We Sow...

So, there's some stuff going on with Matthew - stuff that worries me, makes me fret and has propelled me into the boys' room long after they've fallen asleep, to sit beside him, watching.

Perhaps it's a phase, a dip, a seasonal malady, but whatever it is, it's making Matthew sad. I worry - in that way of parents, mothers in particular -  that it's something I've done/not done, something I've said/not said, seen/not seen, that has dropped the weight of  the world onto his slight shoulders and brought a melancholy look to his eyes.

I worry. I worry....that whatever this is, is my doing. I think this is every mother's plight, at some point or another. That what we've sown is damaged and that our little people will forever bear the burden of our mistakes.


I would carry this mother's heartache forever though, if it meant that my son might find his smile.
The flip side:

The boys spent the weekend with my parents, being spoiled and loved beyond measure. Their cheerful recollections of the day's adventures made my heart sing, when I called each evening before bed. I was especially relieved to hear Matthew's happy chatter - such a dramatic change from the sad and weeping boy of last week.

Last week, I worried that the depression that's plagued me for the past few months had caught him in its icy grip. I sat, watching him sleep, thinking, "Oh, please don't let him be an emotional wreck, like his mother!" 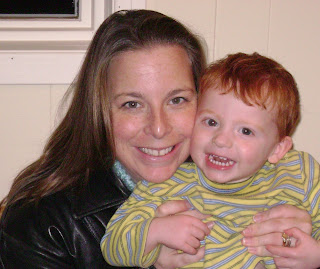 Yesterday, my mum relayed two stories, back to back. She prefaced it, coincidentally, with "Here's a great example of reaping what you sow, Liz! First, a story about you and the second, about Matthew and the things you've passed on to him."

The story, summed up:

Many, many years ago, we had a cottage, where I spent hours traipsing through the forest and brush surrounding it, exploring the overgrown trails, on the lookout for snakes and frogs. Typical, 8-year-old stuff, really.

One day, nearing suppertime,  I appeared at the cottage door with an older man in tow. I was holding his hand and grinning broadly:

"Hi Mum! This is my friend. We met in the woods today. Can he stay for supper?"

My friend, according to my parents, was dishevelled and bedraggled, with yesterday's breakfast still clinging to his long, unkempt beard. He was older, confused and admitted that he "sort of lived" in the trees and bushes beyond the dirt road that ran between my world and his.

He was just as uncomfortable as my parents, but gamely joined us for the day's last meal, while I chattered happily away, oblivious.

I never saw my friend again, but my parents have never forgotten. I cannot remember any of this, which both amuses and horrifies me.  Yesterday, I turned wide eyes to my dad, seeing this funny little tale through new-slightly-horrified-Mama lenses.

He nodded gravely. "I know. What do you think we felt, that day, in the days that followed?"

We could only blink at one another, our shared fears, as parents, as child, unspoken between us.

I barked out a laugh. "Did he haul some poor, unsuspecting fellow out of the bush, too?"

"No, but yesterday, while we waited for Luke and Papa to finish in the grocery store, he helped a man carry his groceries."

"He did?" Pleasure and pride bloomed inside me, tumbled out. "Of course he did!"

"He saw that the man was struggling with his bags and insisted that we help him, so we did. The man, obviously down on his luck and struggling with some sort of speech impediment, was so thankful. We learned his whole life in the few minutes it took to haul his things down the street."

"No, a friend with a car was meant to be picking him up. He was grateful to us, I think."

"Wow. Go, Matthew!" I grinned at thought of his heart - so open, so good, so...vulnerable.

Naturally, this launched a quick and fierce (but friendly) debate about the dangers of talking to strangers vs. basic human kindness. A struggle, always. A conundrum. A worry. A blessing.

As the conversation wound down and we moved onto other things, I sat for a minute, basking in the warmth of my family, my parents' home, my son's kindness.

Perhaps the seeds I've planted - consciously or not - are taking root, took root long before Matthew was even born. Perhaps I needn't worry so much about the mistakes I make as a parent. Not all the time, anyways.

Perhaps I should focus instead on the awesomeness of being his mother and of bringing into the world a child whose heart compels him to reach out, to give, to help. I am proud to know him, this fire-haired boy.

I am prouder still to call him "son."


And you? How have your kids reaped what you've sown?
16 comments:

Around this time last year I listed some of the weird and wacky ways in which my husband and I keep the divorce lawyers at bay home fires burning here at the House of Leprechauns.

In the spirit of those lists and in true "Us" style,  this was one of a series of infuriating yet oddly endearing conversations we had today, Valentine's Day:

Mark: Oh, by the way, thanks a lot.
Me: For what?
Mark: For leaving the gas gauge on empty in your car.
Me: It's my car. I was going to fill it later today.
Mark: Wish you'd told me that before I filled it up.
Me: You filled it up? Thank you!
Mark: Happy Valentine's Day!


A little while later:

Mark: Is this coffee fresh?
Me: Yep.
Mark: Like, "this-morning-fresh" or  "you-just-heated-up-yesterday's-to-trick-me fresh?"
Me: This morning fresh.
Mark: Thank you.
Me: Happy Valentine's Day!

Me, from the bathroom: So what's on your agenda today?
Mark, from the bedroom: Stuff.
Me: Are you gonna expand on that?
Mark: Can I see you naked?
Me: Yep.
Mark: Really?!?!
Me: Happy Valentine's Day!

This afternoon, as Mark rushed about getting ready for hockey and I filled him in on my day:

Me: So, I cried in class again today.
Mark: That's my girl.
Me: What is WRONG with me, blubbering all the time?
Mark:  You're just sensitive.
Me: Is that another of saying I'm a big suck?
Mark: No. Well, yes. But in a good way.
Me: Is there a good way to be a bawling mess at every little thing?
Mark: Yeah. YOUR way.
Me: Really?
Mark: Happy Valentine's Day. Check the printer.

Pause for me to race  down the stairs and snatch up the wonderfully mushy card (heartfelt, handwritten message and all!)  and oh-so-coveted-newest Nora Roberts book:

Me: You got me a card AND a book!
Mark: Yep.
Me: I didn't get you anything.
Mark: I don't want anything.
Me: Not even a card?
Mark: I don't like cards.
Me: Oh.
Mark: I like when you write me stuff, just not in cards. Just, you know, YOU writing ME stuff.
Me: Really?
Mark: Really.

Me:  This is ME writing YOU stuff. I love you. Happy Valentine's Day.

Tomorrow will mark three years since my baby brother passed away. The Reds wanted to talk to him, but these letters - recorded verbatim by me - will have to do:

I wish you could stay alive forever. You haven't been here for a long time. I was sad when I heard the news that you were dead.

Are the any rinks or gyms in Heaven? If there is, play this game called, "Four Corner Hockey". It has four balls in the middle and there's four nets. And get some hockey sticks and then when someone says, "Go!" everyone starts to play.

So tell everybody that in Heaven.

Um, I know that you love all of us and I know that you always have to be dead, but I wish you could always stay. And I always want to play you a song. The song is called, "I Love You, I Guess."

I just want to hug you. And I just liked you. But I never knew that you would get dead. I wish you could stay still.

I want to keep your car that's in our basement and one day you can show me how to drive it.

When you come back to life - because you have a lot of lives, you know - you have to hug me when you get back.

I want to show you sometimes that I poop and pee on the toilet. Actually, all the times.

I just told Mummy that I think you just went on an adventure.