The Right to Bear Arms...

It's random story day here at Life With Bellymonster and I've got a silly one for you. Have been having a friendly convo with some American friends about the right (and desire) to carry a weapon - some of them do carry guns, some want one, others are on the fence.

Me, I'm not a gun person. I'm a "leave-my-house-unlocked-if-you've-chosen-to-rob-MY-house-over-all-the-other-pretty-ones-on-this-street-you-might-need-my-hand-me-down-TV-or-100-dollar-camera-because-clearly-you-have-bigger-issues" kind of person.

This both frustrates and amuses my husband, but even he wouldn't have a gun in the house, which, given the ferocity of some of our arguments is probably a good thing.

Anyways, a million years ago, I spent several weeks in northern Ontario, living with an older couple, as their "Girl Friday." I cooked, cleaned, ran errands, collected Dave from the local watering hole at supper time and generally made a nuisance of myself useful.

My second night there, Dave showed me where he kept his gun - I can't remember what kind it was, only that it was stubby and heavy in my hand. And cold. I remember mostly that it was cold.

In any case, I sat quietly while he demonstrated how to handle, load and clean it before finally clearing my throat to say, "Uh, Dave? This is a nice gun and all,  but I'm never gonna use it."

He frowned and sat down in the chair opposite mine, his face serious. "Liz, for as long as you live in my house, you will ABSOLUTELY know how to protect yourself, if I'm not here or Bonnie's not here. You WILL learn to use this so that you will be safe, unlike the poor young mother down the street who two years ago was brutally assaulted by an escaped convict, in her own home."

So, he taught me. And I paid attention, but my heart wasn't in it. Besides, I thought to myself, as I shifted the gun's weight from palm to palm, I'll never have the balls to actually shoot it.

A few weeks later, I woke in the middle of the night to what sounded like someone trying to break in to the house, through MY bedroom window. I skittered down the hall to Dave and Bonnie's room, dropped to the floor next to Dave's side of the bed, my heart beating so hard, I thought the sound of it alone might wake him.

"Dave," I whisper-shrieked to the side of his face, "DAVE! Someone's trying to get in my window!"

Before I could even summon my next breath, Dave had flung back the covers, landed on his feet and suddenly, his gun was in his hand. He handed me the cordless phone from his bedside table and lifted the bed covers again, motioning for me to climb in beside Bonnie, who was awake and alert, but silent.

"You hear me yell, you dial 911," he ordered and crept back down the darkened hallway.

Minutes passed, but felt like hours while I huddled next to Bonnie, my eyes on the empty doorway, ears straining for the sound of commotion. I don't think I breathed.

And then...a sound! It started low and built to a crescendo.....of laughter.

Clucking, Bonnie pulled me from the bed and together we made our way to Dave, whose hoots of laughter rolled from my room, where we found him peering out my window and pointing.

"I found your burglar, Liz!" he managed, in between mirthful snorts. His gun rested lightly on the windowsill, silent and still. Beyond it, past the neatly-trimmed bushes that sat just outside my window, I saw a large, dark shape, meandering away.

It was a bear.

Apparently, the berries on the bushes had drawn him over and the thudding and deep breathing I'd heard were his bear-noises of delight as he scarfed down  a little early-morning snack.

Bonnie patted my head kindly and wandered into the kitchen to make coffee. Dawn was breaking as we watched the bear pause in the neighbour's yard before loping off down the street, oblivious to the panic he'd caused.

Dave turned from the window, cupping the gun in his hand. "Well Liz," he said with a smile and a sigh, "It's a good thing I was here. Better me holding the gun than you, girl. Left to your own devices, you mighta shot that bear dead, eh?"

More chuckling while I pouted and huffed, "Whatever. You told me to use it if I needed to. I might have been able to, you know." At his chuckle, I scowled some more. "I might have, Dave!"

"Good thing you didn't, love." Dave moved to leave the room as the smell of freshly-brewed coffee floated in. "We'da had to charge you, Liz."

And you?
Tell me about your experience with things that go bump in the night!
6 comments:

Email ThisBlogThis!Share to TwitterShare to FacebookShare to Pinterest
Labels: bears, Belly-isms, small-town, Stuff that makes me giggle, the right to bear arms

On Social Media and Cyber-Meanies

I love the Internet.

I love that I am Facebook friends with practically every person I've ever known. Love that, with a click of the "Publish" button, I can share my life here at Life With Bellymonster with family across the pond or friends just across town.

Twitter just plain delights me and I have spent many a happy hour on Pinterest, dreaming and repinning pictures or sayings or recipes that catch my eye and my fancy.

I love the immediacy of email and the weird freedom that comes from sharing thoughts through the computer instead of face-to-face. Sometimes it's just easier, even for a person like me, who will talk to anyone, anytime.

But sometimes, even I wonder if what we've created isn't entirely good or wise.

The news today is full of Amanda Todd, a young B.C. girl who was bullied to death, via the Internet. She posted about her deepest pain via YouTube just weeks ago and earlier this week, undone by vicious words and actions of strangers, she committed suicide.

My heart aches for her parents and others who loved her. My heart aches for the thousands of other children whose self-esteem and sense of worth and safety lessen every day at the hands of faceless, nameless strangers (or enemies disguised as friends) at the other end of a keyboard.

At the other end of things, a Canadian mother named Jessica Stilwell has brought the ire of an entire nation down onto her head, in less than a dozen posts on a newly-created blog: Crazy Working Mom: Diary of a Mother on the Brink of Snapping.

Discouraged by her family's refusal to pitch in to keep up with the housework, she gave up the picking up and (encouraged by family and friends on Facebook) blogged about the ensuing chaos.  Written with humour and heart, Jessica's story is honest and real and  messy and gosh darn it, people, going on strike from domestic drudgery is something I've wished to do myself, from time to time.

Needless to say, I was shocked and dismayed to discover that so many people, smugly seated at desks or laptops the world over, can do little more than criticize her actions, her marriage, her parenting, her intelligence, her life. Most commenters, it seems, have nothing nice to say at all.

And therein lies the rub.

What are we becoming, as a social media society? Is THIS what it's all about? Tearing down our mothers, our daughters for sharing themselves with us? Does it make those who rip into a stranger feel bigger, wiser, stronger, better when they do? Do those who write things like, "She did it to herself!" or "Sorry, but it's all your own stupid fault!" truly believe that and if so, WHY?

Why do you think it's OK to blast a young girl or a middle-aged mother or a troubled boy or a lonely man for sharing their truth? When did we all become virtual judges and when, pray tell, did we get so damned mean about it?

And finally, why would you choose to hurt with words - typed, spoken, hurled, sung - instead of heal?

It's Thanksgiving, my favourite holiday of the year.

At Thanksgiving in 2003, Mark and I married under perfect blue skies, surrounded by everyone we love: 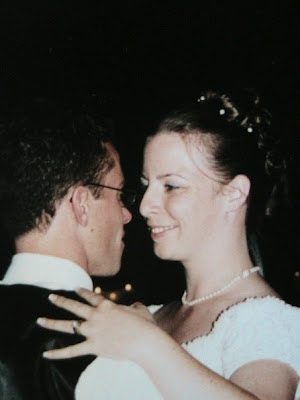 At Thanksgiving in 2005, we brought tiny Matthew home: 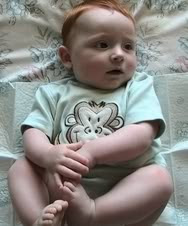 At Thanksgiving in 2007, Luke joined our family: 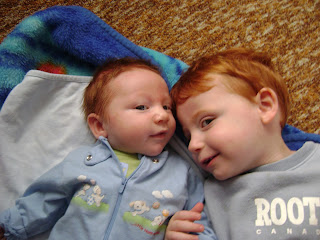 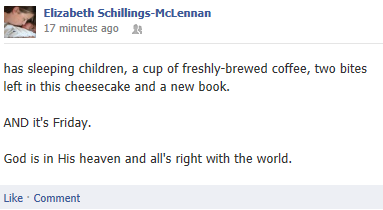 A Poem For Luke, As He Turns FIVE!

What happened to my baby, the super cranky li'l dude?
The boy who waited till after bath to say that he had poo'd? 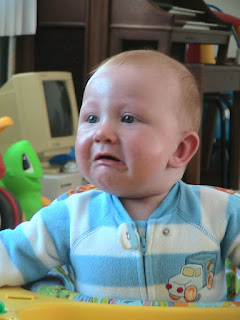 What happened to my tiny Red, whose pant legs had to be rolled?
The grouchy kid who rarely, if ever, did as he'd been told?

Where has he gone, my curmudgeon child, the one with the cheeky grin?
I only see him sometimes now, in the set of a firm, dimpled chin. 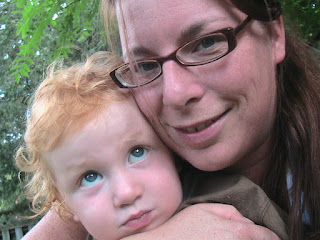 When once he shied from kisses, now Luke doles them out with glee.
He often hugs me softly these days, when once he'd punch my knee.

Diapers and wipes are things of the past: he's proud of his toileting skills.
And he carries his plate to the table, with only occasional spills. 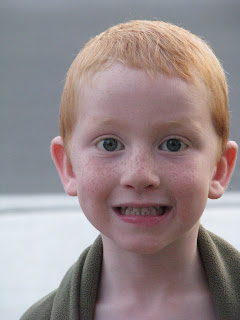 Not long ago, the phone was a toy, that he'd chew on with great delight.
These days, he's apt to pick it up when it rings and sometimes he holds it upright.

Books, once the things he'd rip and tear into, with maniacal glee and aplomb
are now his most treasured possessions: "Please can you read to me, Mum?" 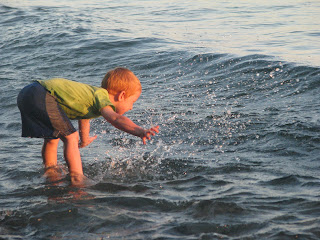 Where has he gone, the small lad who would tumble and wail his way to my lap?
He's too busy for bandaids and picks himself up now, often muttering, "Crap!" 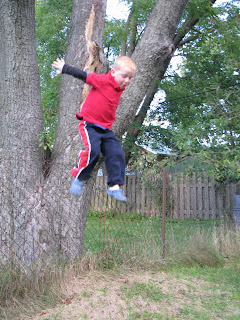 Where has the time gone, these halcyon days, when the morning would stretch on for hours?
Now he is five and he's fierce and he's tough, possessed with fine boy Super Powers. 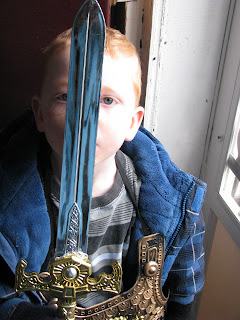 From birth until now, Luke has worshipped his brother, the way that I'd hoped he might do:
best friends ('til they're not), they share secrets, my love,
fine red hair and a bedroom of blue. 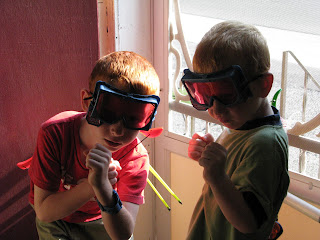 That cross newborn boy who filled spots in my heart that I hadn't known were missing,
will, today, be five and I'm lost in these years, smiling through tears, reminiscing. 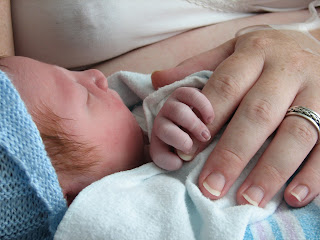 Sweet darling Luke, five years ago, you came into the world from my tummy.
Thank you for being your incredible self and for choosing me to be your mummy.