Eight Against the North: Adventure in Algonquin Park

The plan - such as it was - seemed fairly straightforward: drive to Algonquin Park, paddle for a few hours, pitch tents, sing Kumbaya, play some cards, have a few drinks, repeat for four days.

It was with high hopes and light spirits, then, that the 8 of us, friends since high school, unloaded our packs by the water and waited for Wog to retrieve our permits from the check-in point. While we waited, we divvied ourselves into three canoes: Mark had a broken arm, but could still steer, so Slight-Goddess and I opted to switch off, while her husband, Clarence, went with another couple, to help even out the disproportionate weight in their canoe. G and A would paddle alone.

Piece of cake, we thought. Even when Wog returned with a warning from the Algonquin staff (No fires, it's been too hot and dry and the portage points may be a bit longer, due to low water levels) it didn't occur to me that anything could go wrong.

Day One: When the Algonquin staff said, "Portage distances may increase due to low water levels" what they meant was:

"You will spend four hours portaging through swampland, scale three beaver dams and stumble into your first campsite 10 - 10! - hours from the time you left, which is, incidentally, six hours longer than you'd planned, sorry about that."

That first night, I was so worn out I didn't even care that we'd pitched our tent on an incline and I kept rolling over onto a tree root. None of us felt like eating, which was a blessing really, as the fire-ban would have made cooking impossible and no one was up for a game of cards. Instead, we threw ourselves into tents and sleeping bags and fell asleep praying for an easier tomorrow.

Day Two: Pack-out went smoothly and we were a chipper bunch, paddling happily into the wilderness. We laughed and called out to one another, saw two moose and a loon family. Indeed, as I trailed my paddle in the water, felt the rising sun on my back and listened to my friends' happy voices, I forgot all about our dismal beginning and was content.

Just as we'd found a decent pace and had settled into an easy morning of paddling, we struck land.

Where they ought to have been a narrow, yet deep channel to paddle through, there was instead, swampland. We'd have to walk it. And so, grumbling and groaning, we hoisted canoes and paddles and backpacks and soldiered onward, determined to make camp by lunch.

By 2 pm, we'd scrambled over two more beaver dams, traipsed through wilderness so wet and humid I kept asking if we weren't in Vietnam and if so, would someone please shoot me and Sonja lost her shoe in the mud. For good.

About 3 kilometres from our campsite (according to our map), we decided to leave one canoe anchored to a beaver dam, haul everything else to the site and send Mark back for the canoe. Though I went to keep Mark company, it soon became apparent that I was only holding him back, so I sat down on yet another beaver dam, promising to sing loudly until he got back. There's nothing like raising one's voice in praise, surrounded by the beauty of an (almost) unspoiled and rugged land... 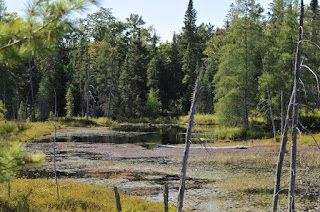 I feel certain that the only reason that moose slurping water at the edge of an inlet about 800 metres away only left - crashing through the brush at an alarming speed, given his awkward-looking body - to gather more wildlife friends for the impromptu concert, not because he didn't appreciate my voice.
But I digress... 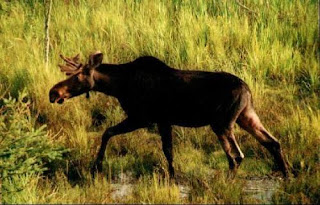 Day Three: Holy hell. It was hot - a steaming, humid blanket of hot that pitched everyone into a foul mood before we'd even broken camp. Like petulant children, we bickered as we shoved our canoes into the water, dreading the unknown challenges ahead, hoping it wouldn't be worse than the day before, which of course, it was:


During Portage #377,  the strap on my backpack broke just as Clarence began to complain of chest pains. G. and his girlfriend got into an argument when she swung the canoe she carried too quickly and almost knocked him off his feet. Sonja had long ago fallen into a broody silence, no doubt  missing her lost shoe and her air-conditioned apartment while the rest of us wondered - sometimes aloud - if we'd be fined for lighting a fire during a fire-ban, in case we needed to get Clarence helicoptered out of the park.

And then, dear readers, there were the leeches.

(I Googled images of leeches to share with you here, but was so overcome, I couldn't pick. You'll just have to go ahead and google 'em yourself. Don't say I didn't warn you...)

I did not. Not until several of our motley crew stopped and began peeling the black, still-moving slugs from between their sandaled toes. Oh. my. GOD.

Moving swiftly, so as not to draw the leeches' attention my way, I dug into my pack for a pair of socks and jammed them onto my feet. I spent the next three hours shrieking with horror at the leeches that had suddenly found their way into my field of vision and dreaming of a tall glass filled with ice and Coca-Cola and a straw...


Wanna know what happened next?
Come on back tomorrow and read along as our Trip from Hell Eight Against the North: Adventure in Algonquin Park (also known as "How Kool-Aid Saved My Life") went from bad to worse...